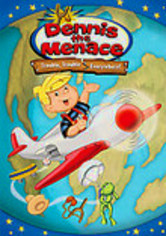 2008 NR 1h 17m DVD
Lovable troublemaker Dennis the Menace travels the world, managing to find himself in hot water along the way in this collection from the popular animated series that follows the Mitchell family on several exciting vacations. The seven episodes feature Dennis chasing kangaroos in Australia, getting mixed up in an Italian heist and coming eye-to-eye with an angry bull in Spain. But wherever he goes, Dennis always manages to have fun.

Parents need to know that in this pumped up version of the original Hank Ketchum cartoon Dennis leaves the domestic realm to play in tanks, catch bank robbers, chase kangaroos, and even fly a rocket ship. Dennis sometimes gets hailed as a hero when he was, in fact, doing something he shouldn't have been. And despite some mild violence and big mistakes, there are never any negative consequences.

Lots of slapstick and fantasy pratfalls that don't affect anyone permanently. Most of the violence comes either from Dennis' misadventures or in the catching of bad guys.

Some mixed messages. Dennis and his crew sometimes fight bad guys. But he is also sometimes hailed as a hero when he was, in fact, doing something he shouldn't have.