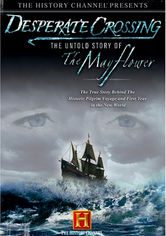 2006 NR 2h 23m DVD
Drawing scenes and dialogue from the records of participants and eyewitnesses, this first-rate documentary meticulously re-creates the saga of the Pilgrims, from their extraordinary Mayflower crossing to their encounters with Native Americans. Featuring a cast of actors from the Royal Shakespeare Company, the program was filmed at Plimoth Plantation in Massachusetts and locations in England, Belgium, Maryland and Virginia.