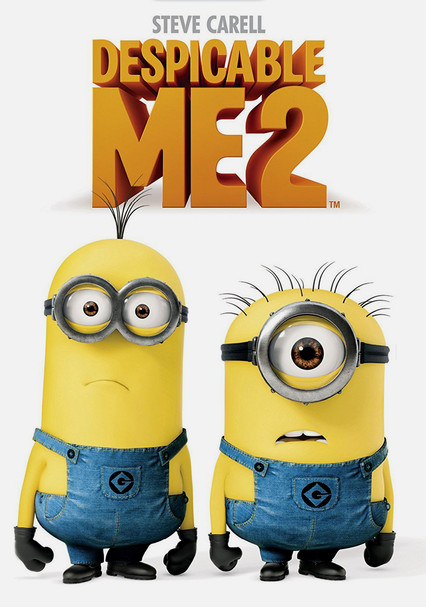 2013 PG 1h 38m Blu-ray / DVD
Arch-villain Gru and his three orphan girls return for more shady exploits in this wacky animated feature voiced by some of Hollywood's biggest stars. The story features new and eccentric characters and a plot to abduct Gru's team of minions.

Parents need to know that Despicable Me 2, the sequel to 2010's hit supervillain adventure Despicable Me, features gadgets and weapons like the original, but now with the aim of stopping "evil" instead of perpetrating it. There's a romantic subplot between Gru (voiced by Steve Carell) and Lucy (Kristen Wiig), an Anti-Villain League agent. Margo (Miranda Cosgrove) has her first crush and boyfriend as well, although both couples mostly flirt and stare at each other (the adults do kiss). Language is mild ("nutjob," "sheep's butt"), and the violence is cartoonish and silly but does include biological weapons and a taser gun. Mexican restaurant owner Eduardo is depicted somewhat stereotypically (his restaurant is Salsa and Salsa, he has a pet chicken he calls el pollito, and he throws a lavish Cinco de Mayo party). Otherwise, this is a minions-filled animated adventure for the entire family.

Gru goes on a date. Gru and Lucy fall in love and kiss. Young Margo falls for Antonio, and the two dance and hold hands.

Because Gru is happy and no longer a supervillain, there's not as much violence this time around. There are cartoonish scenes in which Gru and his minions are tasered, but the only "real" violence is near the end, when (possible spoiler alert!) the minions are transformed into purple killing machines (although strangely still cute) that can destroy everything around them. Lucy is taken hostage. The minions become weapons, and Gru and the girls must use antidote-filled guns to turn them back into the harmless yellow creatures we all love. The bad guy threatens Gru with knives. A chicken has a vendetta against Gru and Lucy.

The strong bond between fathers and daughters is stressed, as is the importance of open communication between parents and children, as well as romantic partners. Gru's love story shows that even people who consider themselves unlovable can find love. That said, some have criticized the way that Gru's potential dates are depicted (either unattractive or plastic surgery-enhanced) and how the movie makes it seem that Gru and the girls need a wife/mother to complete their family. But Gru was actually perfectly happy raising the girls with just his minions as helpers and wasn't "looking" for a wife. And Lucy is a remarkable woman who fits in with the family because she and Gru respect each other, not "just" because she's a woman.

No product placement in the movie, but Despicable Me (especially the minions) has plenty of merchandise tie-ins and even a big ride at Universal Studios Orlando.