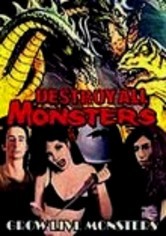 1976 NR 2h 25m DVD
Avant-garde 1970s band Destroy All Monsters never released an official album, but the cult favorite's legacy is preserved in this collection of home movies and amateur videos by and about the Ann Arbor, Mich., group. The four members, Niagara, Jim Shaw, Cary Loren and Mike Kelley, were influenced by punk, heavy metal, the psychedelic scene and performance art, but this indescribable compilation makes it clear that they were unlike anything else.