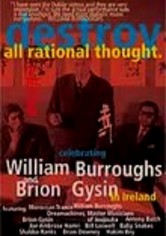 1993 NR 0h 49m DVD
Filmed in Dublin in 1992, this documentary is an account of the Here to Go music and art festival created to celebrate the life and works of beat poets William S. Burroughs and Brion Gysin. Organized by writers Terry Wilson and Joe Ambrose and Irish singer Frank Rynne, the festival showcases visual, literary and performing artists. Featured figures from the scene include the Master Musicians of Joujouka, Ira Cohen, Hakim Bey and many more.