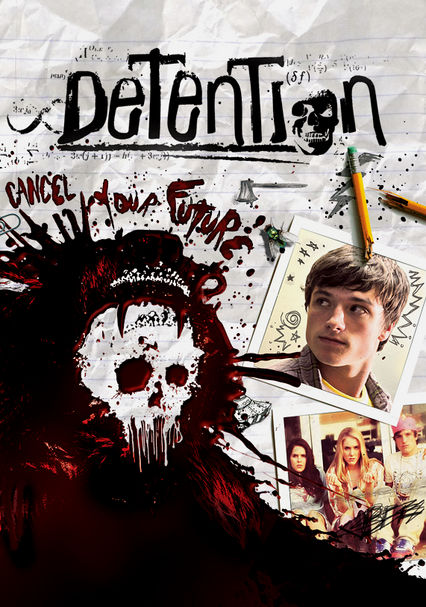 2011 R 1h 33m Blu-ray / DVD
In this genre-bending slasher flick, a high schooler gets slapped with detention on the same night as senior prom. But plenty of other kids will also be missing the big event when a past-her-prime prom queen shows up to slay them.

Parents need to know that, like most slasher flicks aimed at high schoolers, Detention is a crudely violent film with crass language and sex talk, including a couple of scenes with partial nudity. There's loads of the blood, gore, and at times comic violence expected from this genre, but there's also one scene of a girl trying to hang herself that might upset parents and disturb any teen who's ever dealt with suicidal thoughts or the suicide of a loved one. The language includes the usual suspects of "f--k," "s--t," "bitch," and other insults. There are lots of references to sex (including virginity, promiscuity, bodily fluids, etc.) and two quick glimpses of breasts and one of teens having sex in bed. Underage characters also drink, sometimes to the point of extreme drunkenness. Although there aren't many role models in the story, the movie does make audiences think about all of the stereotypes in popular teen horror films.

Many crude mentions of sex, virginity, sexual acts/positions, and body parts/fluids. There's nudity (an exposed breast that's sexted around the school) and breasts in a movie-within-a-movie sequence. One scene shows a high-school football player having sex (he's bare-chested and thrusting on top of his date) in bed. There's an involved discussion about how only virgins are targeted by masked movie serial killers, and then the two girls taunt each other that they should each be safe (since one is promiscuous and the other has an embarrassing first time to recount). A girl tells her ex that he lied because it's "not normal for semen to glow in the dark." Riley turns a chaste comforting hug from a handsome teacher into a come on until he breaks the embrace with a nod toward his lover, who smacks him in the rear. Two teens get into a scuffle that looks like the guy is having sex instead of fighting with the girl.

The aim of Detention's graphic violence is to shock but also to amuse, so many of the plentiful gory scenes have a humorous undertone. There's a ton of blood on display during the various killings. Teens are usually hacked to death by the Cinderhella copycat, but other characters blow up, have their limbs amputated, and otherwise meet their end in a bloody manner. The movies within the movie are even gorier than the feature film, featuring gross torture sequences. In one case, a girl is forced to place an item inside her stomach, so her insides are visible. Needless to say, there's a high body count. An attempted suicide is treated in a joking manner.

Despite all of Detention's crude gore, substance use, and sex jokes, the filmmakers do challenge the audience with some interesting ideas about popular culture. All of the movie's excessive self-referential humor and commentary forces media-savvy audiences to consider just how predictable and formulaic teen slasher flicks have been in recent movie history. A couple of scenes -- like the montage of high-school detention throughout the '90s and '00s -- are particularly clever ways of demonstrating the genre's stereotypes.

Constant references to popular culture, particularly the '80s and '90s. Every scene includes mentions of movies, TV shows, musicians, songs, and even fashion trends. The most referenced are the movies Scream and The Karate Kid, as well as Fresh Prince of Bel-Air, My So-Called Life, Sting, Hanson, etc.

Lots of underage drinking -- from beer to hard liquor (vodka, cocktails). Several teenagers get drunk at a party, some to the point of vomiting. Riley purposely drinks until she's so wasted that she hooks up with someone on the couch and winds up exposing her breast, which is quickly photographed and texted to the entire school. A mother is a lush who's rarely shown without a drink in her hand.