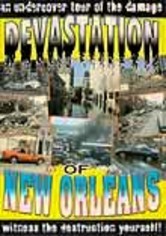 2005 NR 1h 0m DVD
Never in American history has a major metropolitan city been so devastated by a natural calamity. This engrossing documentary affords viewers an inside look at the shocking and almost total ruin left in the wake of 2005's Hurricane Katrina. The scenes captured here include disquieting images of buildings, houses and whole neighborhoods being swallowed by rising floodwaters, and the havoc that ensued immediately after the storm hit.