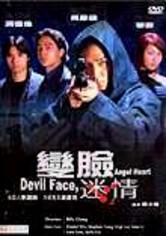 2002 NR 1h 27m DVD
Daniel Wu stars in this crime drama as Long, a man who was born severely disfigured. His brother Kwan knows that Long's face prevents him from earning a decent living, so Kwan decides to work as a hired killer for Dinosaur, a gangster kingpin, to bring in extra money. But Kwan soon finds out that Dinosaur is extremely dangerous, and when he has the chance to help put him behind bars, he must wrestle with his conflicting priorities.