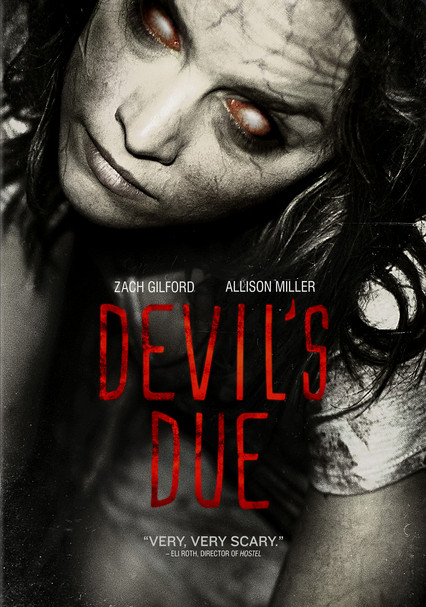 2014 R 1h 29m Blu-ray / DVD
After a mysterious night on their honeymoon, Zach and Samantha McCall find themselves dealing with an earlier-than-planned pregnancy. While recording everything on video for posterity, Zach notices odd behavior in his wife, which they initially attribute to nerves, although it soon becomes evident that the disturbing changes to Samantha's body and mind have a much more sinister origin.

Parents need to know that Devil's Due is yet another "found footage" horror movie, which also borrows several ideas from "demon baby" movies like Rosemary's Baby. It contains a decent amount of blood, including a gory corpse, a stomach-slicing, and two dead, bloody deer. The movie also features lots of shouting and scary stuff. It talks about certain details surrounding a pregnancy, though sex isn't particularly shown or discussed. The couple kisses a lot, we see the woman wearing only towels and/or panties, and there's some brief innuendo. Language includes several uses of "f--k" and "s--t." Characters drink shots and get very drunk at a club, and wake up with a hangover.

A young married woman gets pregnant, there's lots of discussion about her pregnancy, i.e. trips to the doctor, to classes, etc. There are references to "the pill." The couple kisses frequently. In one shot, the woman takes a bath, and there's a tiny glimpse of her, naked, in the distance, through a doorway. She is shown in other scenes in a towel after a shower, and in a tank top and panties waking up in the morning. In another shot, the man makes a joke by holding a breast pump next to his crotch area.

In the final stretch, we see a gory, bloody corpse, with a woman smearing the blood all over the floor. The demon-possessed woman is shown eating from the bloody corpse of a dead deer (slightly offscreen), and a second dead, bloody, insect-ridden deer is shown. A woman slices open her stomach. When the demon has fits of violence, it throws people and furniture into the air; one teen is thrown into a car, and his bloody hand is shown. The main character is shown covered with blood. A priest has a bloody nose, and blood dribbles onto his white cloak. There's a brief, partly obscured satanic ritual. A doctor sticks a big needle into the pregnant woman's stomach. Otherwise, there are some jump-shocks and other scary imagery.

No real messages here, except that, if you're ever in Santo Domingo and a cab driver offers to take you to a "special" nightclub, refuse.

An Apple computer is shown, with the logo very visible. The couple receives a Vitamix for a wedding present, and the woman is shown gushing over the gift for a moment.

During their honeymoon, the couple is shown drinking heavily at a club, downing shots, etc. They both wake up with a hangover. Afterward, wine bottles and wine glasses seem to be ever-present at their house, but it's very rare that anyone is actually seen drinking it. (People are seen holding glasses, and glasses are shown empty, etc.)