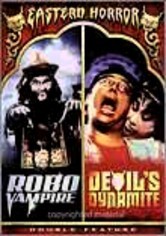 1987 NR 1h 30m DVD
Who'll prevail in a winner-take-all battle between a fearless android and a gang of bloodsucking vampires? The half man-half machine will have to use all his wits and power to gain the upper hand on these ravaging vamps. Throw in a drug smuggling subplot, and there's action at every turn! Angela Mao and Richard Phillips star in director Joe Livingstone's unorthodox blend of martial arts mayhem, crime thriller and horror flick.