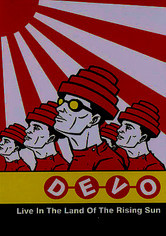 2004 NR 1h 15m DVD
Scores of Japanese fans are treated to the high-energy, postmodern, idiosyncratic sound of new wave pioneers Devo in these performances from their tour of Japan in 2003. One of the biggest bands of the 1980s, Devo has been rocking the world with their irreverent, futuristic style for more than 25 years. Also featured are backstage footage, a shopping trip with fans in Tokyo, live performances and never-before-seen exclusive footage from 1981.