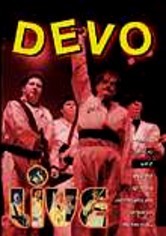 2004 NR 0h 54m DVD
Early 1980s rockers Devo (those paragons of herky-jerky movements and futuristic jumpsuits) reunited in 1996 for a fantastic performance at Irvine Meadows in California. The live 12-song set is punctuated by the band's iconoclastic flair. Includes rare footage, an interview with the band and a behind-the-scenes look after the show. Tracks include "Whip It," "Girl U Want," "Satisfaction," "Uncontrollable Urge," "Blockhead" and more.