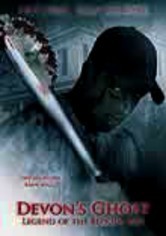 2005 R 1h 30m DVD
A serial killer is on the loose in a small town, leaving it paralyzed with fear. But a group of teenagers, including Symphony (Karan Ashley) and Josh (Johnny Young Bosch), have had enough. They suspect that the perpetrator is the same one who killed a boy named Devon (Brian Bentley), since the manner in which Devon was executed is similar to the present horrors. But are the teens better off letting sleeping dogs lie?