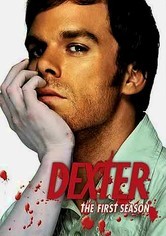 2006 NR 4 discs
Playing a sympathetic serial killer might sound like a stretch, but former "Six Feet Under" star Michael C. Hall pulls it off in this macabre drama about a likable forensics expert who channels his violent tendencies into knocking off miscreants.

Parents need to know that this violent drama -- originally made for pay cable -- also airs on CBS in primetime. Its "hero" is a serial killer, it's extremely dark and violent, and it's not intended for kids or teens in any way. CBS has bleeped out the profanity but left the story untouched. Blood is shown so often that it's almost a secondary character, and the protagonist is probably one of the worst role models a kid could have. Expect to see graphic close-ups of severed arms, legs, and heads. And running a close second to the bloody visuals is the psychological mayhem that comes with taking a peek inside the twisted mind of a killer.

This series is about a killer, so blood (dripping, pooling, clotting) abounds. There are several graphic shots of dead bodies that have been completely decapitated and dismembered. Dexter chops up all of his victims and disposes of them in garbage bags that he dumps in the bay. Other violent acts include shouting, pushing, choking, and strangling. Subjects touched on in the series include rape, pedophilia, domestic violence, and the twisted mind of serial killers.

Although he justifies his murderous behavior as doing a favor to society, Dexter gets off on blood, death, and killing. Enough said.

Illegal drugs are discussed occasionally in relation to crime scenes and police matters.