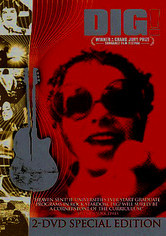 2004 R 1h 47m DVD
Documentarian Ondi Timoner spent seven years (and 1,500 hours of footage) chronicling the rise of two rival musicians -- Anton Newcombe of the Brian Jonestown Massacre and Courtney Taylor of the Dandy Warhols -- both of whom were intent on carving out their own piece of the highly volatile and unpredictable music business. The film follows the two wannabes through their loves, obsessions, arrests, death threats and relative success.