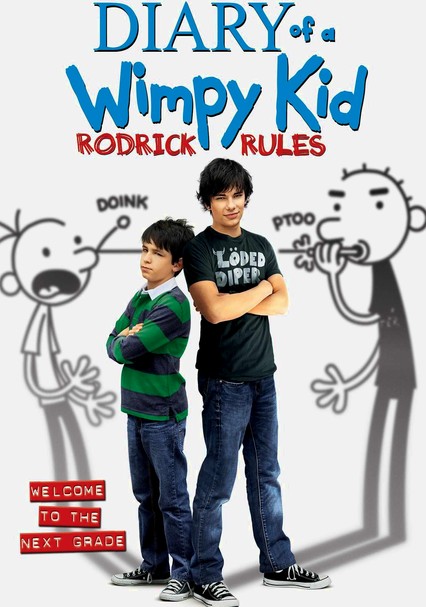 2011 PG 1h 36m Blu-ray / DVD
Greg Heffley returns to overcome ridiculous obstacles in this sequel to the first Diary of a Wimpy Kid adaptation, based on the books by Jeff Kinney. This time around, Greg must cope with the habits of his insufferable brother, Rodrick.

Parents need to know that this sequel to 2010's Diary of a Wimpy Kid (based on the hugely popular series of books by Jeff Kinney) continues the misadventures of Greg, a middle-school kid who tries a little too hard to be popular. There's less scatological humor this time around (except for some bird poop), but there is a scene in which Greg's older brother, Rodrick, throws a wild party while his parents are out; teens drink from anonymous red cups and act crazy, though there's no real mention or implication of alcohol. Other scenes include some shouting, threatening, and bullying, as well as a brief fight. Characters also toss around middle-school insults like "jerk," "loser," and "butt brain." Fans of the original movie will find more to enjoy here, although there's less Rowley in this installment.

Some minor flirting, as Greg develops a crush on the pretty new girl in school.

Some bullying and threatening. Rodrick picks on Greg mercilessly, and in one scene, they physically start to brawl; Greg jumps on Rodrick, and they both fall to the floor, struggling.

Despite his ongoing attempts to become popular with his peers (each and every one of which backfires), Greg learns important lessons about being himself and sacrificing his self-respect for someone else's best interests -- in this case, his older brother, Rodrick. The siblings find a way to bond with each other this time around ... although their bond springs from their mutual need to cover up some bad behavior.

The kids in this movie seem to eat a lot of junk food, but for the most part, brands are effectively disguised or parodied. A bottle of "Cola" is visible in one scene, and it looks like it might be "Coca-Cola," but it's not for certain. "Cheese Curls" are visible, and a "Twix" candy bar is seen more than once.

Rodrick throws a wild party, and teens are seen drinking from red cups, the contents of which are unknown. No mention or suggestion of alcohol is ever made, but in that context, some viewers could infer that that's what's in the cups. In one scene, Rowley lip-syncs to Ke$ha's "Tik Tok," which includes lyrics about drinking and partying.