Diary of the Dead 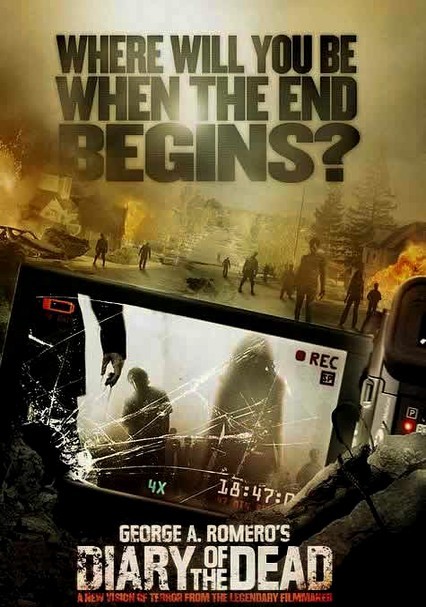 Diary of the Dead

2007 R 1h 35m Blu-ray / DVD
While filming a low-budget horror film, Jason (Joshua Close) and his film school friends hear news reports of zombie sightings. As the living dead close in on the film crew, Jason seizes the opportunity to add real blood and guts to his movie. Meanwhile the American government promises to stop the violent uprising, but the relentless zombies gain an advantage by wiping out all forms of communication with the outside world.

Parents need to know that this zombie horror movie is full of bloody violence and gory effects. Expect fights, shooting, disembowelment, gruesome wounds, and flesh-eating -- in other words, all the hallmarks of George A. Romero zombie movies. There's a brief shot of a girl's bare breast, as well as some kissing and allusions to "tits." The professor character drinks almost nonstop, including while advising and rescuing his students. Lots of strong language, particularly "f--k" and "s--t." The hectic handheld camerawork may be a problem for some viewers.

Girls dress in close-fitting, cleavage-revealing tops; brief shot of one young woman's breast. Brief kissing by couples. An actress complains that girls in monster movies fall and their "tits fall out" -- then later in the movie she does just that.

Extreme, gory violence throughout, including gunfire (zombies take many bullets to chests and limbs, and, most effectively, to their heads), explosions, crossbow shots (arrows go through bloody zombie heads), wrestling, and kicking. Repeated hectic battle and chase scenes as victims run and/or fight back. Zombies bite/rip open necks and eat flesh. A van slams into and decimates zombies. Girl shoots herself in the head (bloody effects and tearful friends). A hospital patient's entrails fall out (very bloody). Looting and frenzy in the street. Virtuous Amish farmer splits his own head -- and a zombie -- with his scythe. Zombie killed by pouring acid on its head (gross). Lengthy climax, with characters recording images of friends being attacked.

Professor is an alcoholic and drinks from a flask and other liquor sources frequently; he also behaves drunkenly. A couple of students hole up in a mansion, boast of drinking, and appear high in an Internet video. Cigarette smoking.