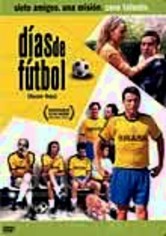 2003 NR 1h 49m DVD
Alberto San Juan, Ernesto Alterio, Natalia Verbeke, Peter Ponce and Fernando Tejero star in this Spanish comedy that proves everyone deserves a second chance. Upon his release from prison, an ex-con reconnects with his circle of buddies (now in their 30s), only to find that they haven't made much progress since he went behind bars. To kick them into shape, he forms a neighborhood soccer team and schools the ragtag bunch in sportsmanlike conduct.