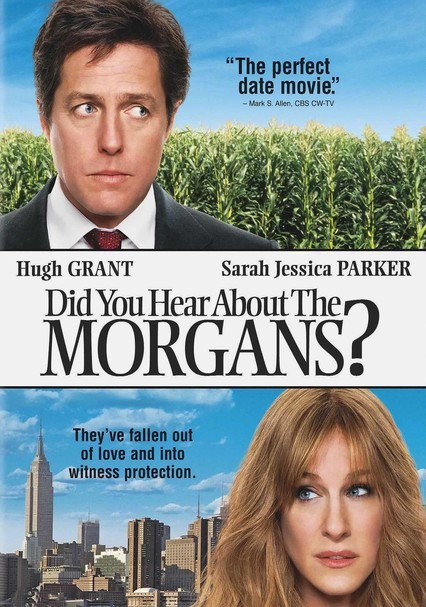 2009 PG-13 1h 43m Blu-ray / DVD
Marked for death after watching a hit man commit murder, an estranged couple is forced to enter the Witness Protection Program. Leaving New York City behind, they land in Wyoming -- where adjusting to their new environs is easier said than done.

Parents need to know that this Hugh Grant/Sarah Jessica Parker romantic comedy is a classic fish-out-of-water tale that could appeal to romcom-loving teens, despite its bland story. There are a few kisses and references to sex, marriage, and infidelity. Strong language is surprisingly infrequent (one "s--t" and "bulls--t"), and most of the violence -- including minor gun violence (and gun use in general, in the parts that take place in Wyoming), as well as some comical scenes involving bear spray -- is concentrated briefly at the beginning and the end of the movie. Expect a fair bit of product placement/promotion, including BlackBerry, Gillette, and more.

Paul and Meryl kiss a few times and cuddle (in their pajamas) in bed together. They also discuss Paul's adultery on several occasions. Secondary couples dance, flirt, and kiss as well, but nothing too risque.

Some gun violence, but nothing bloody. A man with a knife in his back plunges to his death, and a hit man tries to shoot a couple. The same hit man opens fire again in a crowded place. Most of the population of Ray, Wyo., is armed (legally, it's presumed) with guns, and a couple of scenes revolve around characters learning to shoot a rifle and then using it against the hit man. Comical violence includes the use of bear spray on a man -- twice.

Paul and Meryl learn to appreciate what Wyoming has to offer -- open sky, a slower pace, and friendly, unjaded people -- even though they're die-hard, snotty New Yorkers. The importance of fidelity and loyalty in marriage is another obvious theme.

An elderly man smokes cigarettes in his restaurant. Paul and Meryl have wine on their table at dinner.