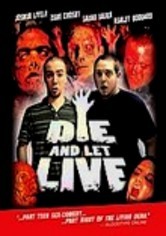 2006 NR 1h 15m DVD
When a disaster at a nearby medical testing facility unleashes an army of zombies starved for human flesh, Benny (Josh Lively) is forced to abandon his plans to woo the girl of his dreams (Sarah Bauer) away from her pigheaded boyfriend (Jonas Dixon). But as the night drags on, he begins to believe he can win his crush's heart and keep it from being devoured by the living dead. Zane Crosby also stars.