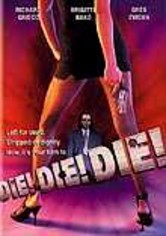 2000 R 1h 22m DVD
When mobster Frank (Richard Grieco, best known for his renegade cop role in the TV series "21 Jump Street") cheats sexy girlfriend Macy (Brigitte Bako, of "Red Shoe Diaries" fame) out of her end of a robbery, he soon discovers he's made a big mistake. Left for dead, Macy proves she's anything but has she plots revenge on her double-crossing ex in this female version of Payback directed by Gordon McLennan.