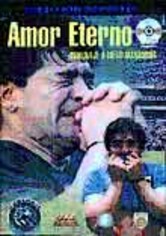 2005 NR 1h 0m DVD
Diego Maradona shows off the amazing moves that made him Argentina's second-highest goal-scorer in this tribute to the world-class soccer player. This exciting program showcases Maradona's last match and features previously unreleased images of the phenomenal athlete in action. Maradona has won two and played in four FIFA World Cup Championships and was awarded FIFA's "Goal of the Century" for a 1986 score against England.