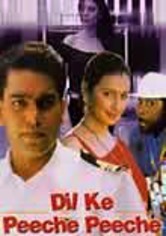 2005 NR 1h 50m DVD
Overcome by a forbidden attraction to his brother's wife, a respected naval officer spirals into a deep depression and ultimately commits suicide. But the real tragedy is that he never gets to see his navy-bound daughter follow in his footsteps. Ashutosh Rana, Abbas, Divaya Datta, Anupama Varma and Johny Lever co-star in this moving Bollywood drama that was written, produced and directed by Gopal Malhotra.