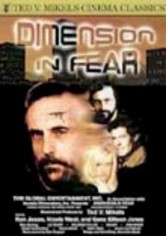 1998 NR 1h 48m DVD
Ron Jason, Nikki West and Gene Ellison-Jones star in this chilling thriller written, directed and produced by independent filmmaker Ted V. Mikels. Justice has been a long time coming for a true-blue detective who's been tailing his ultimate nemesis, an escaped serial killer bent on destroying everyone who got him locked up in the first place. He's out for blood, but the cops aren't going down without a fight.