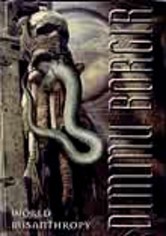 2002 NR 2 discs
Norway's black metal giants Dimmu Borgir bring the misanthropy straight to you with this jam-packed collection of performances, interviews and backstage footage shot during the band's 2001-02 world tour. Also included is the documentary Experience the Misanthropy, which features the band's 2001 performance at the Waken Open Air metal festival, as well as early live appearances and rare band photos.