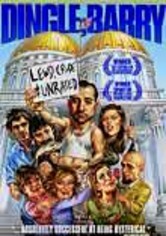 2006 NR 1h 32m DVD
Barry Dingle (writer-director Barry Shurchin) has always been a loser in the game of life. But that doesn't stop his overbearing mother (Veronica Cartwright) from trying to ride his coattails to Capitol Hill. Fixing him up with a senator's pretty daughter (Nicole Sullivan), she coaches him through a courtship and a competition with three other suitors -- who just so happen to be the sons of her bitter rival. Lukas Haas co-stars.