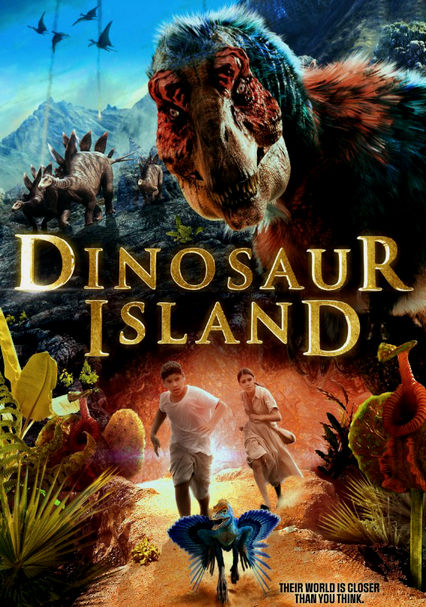 2014 NR 1h 23m DVD
A vacation becomes the adventure of a lifetime as a boy finds himself stranded in a world filled with ghost ships and prehistoric creatures. He embarks on a journey that will change his future forever.

Parents need to know that Dinosaur Island, an Australian live-action import that went direct to DVD in the U.S., is an adventure story that finds two kids magically transported to a timeless island where they encounter dinosaurs and other mysterious creatures. Kate, a child from 1940, arrived on the island many years earlier, while Lucas is a boy from the present day. As Kate tries to help Lucas find his way back to his missing airplane, the duo must avoid or escape from assorted imaginary and real animals and insects, as well as a tribe of native boys. It's standard action that young audiences who understand make-believe should have no trouble with: chases, captures, narrow escapes from ferocious CGI dinos with sharp teeth and angry eyes, slobbering giant centipedes, murderous man-eating plants, and other mildly scary beings. A spooky, threatening dense mist cover provides atmospheric suspense with rumbling, shaking, lightning, and darkness in several scenes. No one is hurt or killed; it's mostly danger via sound and visual effects, not physical contact.

A dark mist envelops a number of airplanes and the isolated island amid roaring thunder and lightning; plane passengers, including young Lucas, plummet to Earth in the dense clouds. Ferocious CGI (computer-generated imagery) dinosaurs gnash their giant teeth, threaten, chase, and surround the two heroes in numerous scenes. An assortment of other imaginary creatures (a giant centipede, man-eating plants) attack as well. A tribe of young black tribesmen (mostly kids; often laughing) chase, capture, and imprison Lucas and Kate. A friendly pet dinosaur appears to be dead but revives after a short time.

Resourceful kids, even when on their own, can surmount obstacles and survive. Earth has been host to many miraculous and awe-inspiring creatures.