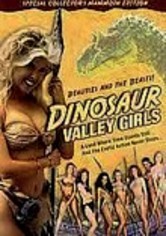 1997 NR 1h 34m DVD
Hollywood action star Tony Markham (Jeff Rector) keeps having dreams of a prehistoric land filled with dinosaurs and scantily clad cavewomen. Upon finding a magical amulet, his dreams become reality as he's transported back in time to the Stone Age. Will Tony be able to use his martial arts moves to fight off the dinosaurs and the Dinosaur Valley Guys &NFiand&NFi_; get the sexy cavegirl Hea-Thor (Denise Ames) who's been making cameos in his dreams?