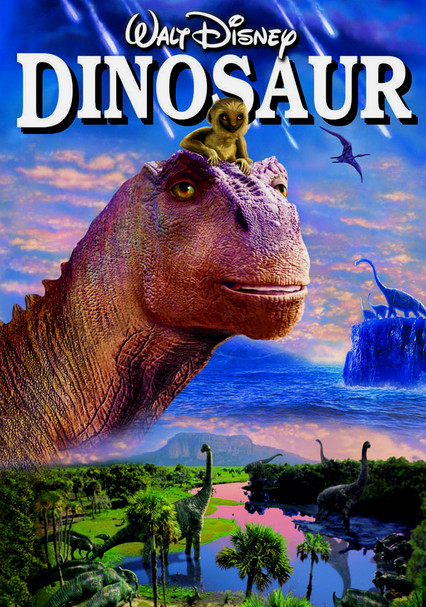 2000 PG 1h 22m DVD
An orphaned Iguanodon named Aladar grows up in the care of a group of lemurs. But when a meteor shower appears, Aladar and his lemur "family" flee their homeland and seek safety. While on the run, Aladar encounters other dinosaurs for the first time.

Parents need to know that Dinosaur is a Disney film set in prehistoric times that is filled with battles to the death, vicious predators, and heroes frequently in danger from both nature and enemy species. The filmmakers use spooky music, very dark settings, and ferocious roars to heighten the intensity. Alternating with survival-of-the-fittest sequences are ones set in a world of beauty and accessibility featuring warmhearted dinosaur heroes and comic, loving lemurs. It's an odd combination of scary and likeable -- not for very young or easily frightened kids.

Landslides, meteorites, a tsunami, a cave collapse, fire, and enemies all threaten the heroic dinosaurs. The carnotaurus (carnotaur) is the main predator -- often shown in attack mode, close-up, toothy, and viciously roaring. There are many brutal one-on-one fights (and some kills) between mega-strong dinosaurs. The main, humanized characters, whom the audience has grown to like, are often in great danger.

Heartily encourages teamwork and standing together to accomplish goals. The survivors are those who refuse to give up and decide to fight for their lives. Also promotes helping the less fortunate even when it's risky. Great leaders are those who truly care about the welfare of their followers.

A plant is used to help relieve the pain of a dying dinosaur.