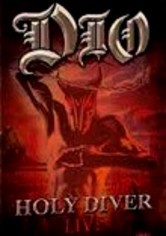 2005 NR 2h 6m DVD
Fronted by singer Ronnie James Dio, rockers Dio perform their classic debut album, "Holy Diver," 22 years after its release in this double concert. For the first time, the band is captured performing their 1983 masterpiece in its entirety in front of live audiences at Spectrum and London. The album features some of the band's greatest singles, such as the title track, "Don't Talk to Strangers" and the metal anthem "Straight Through the Heart."