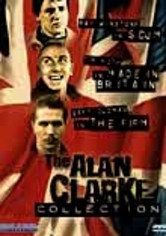 1991 NR 0h 53m DVD
Alan Clarke's films exposed a real, raw world as no other films have. Works such as "Scum," "Made in Britain," "The Firm," "Rita, Sue and Bob Too" and "Elephant" inspired a generation of British actors, writers and directors that changed cinema forever. This documentary features rare behind-the-scenes footage and interviews with friends and colleagues of Clarke, including Tim Roth, Danny Boyle, Stephen Frears, Ray Winstone and Phil Daniels.