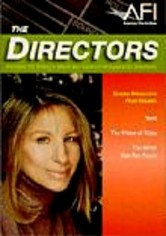 2000 NR 1h 0m DVD
For more than 40 years, Barbra Streisand has been perfecting her skills as actor, singer, writer and director -- in the process selling more than 80 million records and winning Oscar, Tony, Emmy, Grammy, Peabody and Golden Globe awards … and the honor of being the first female subject of the American Film Institute series "The Directors." The special includes interviews with Mimi Rogers, Marvin Hamlisch, Lauren Bacall, Pierce Brosnan and more.