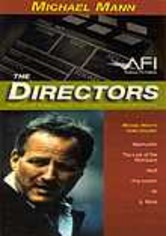 2001 NR 0h 58m DVD
Michael Mann, the celebrated director of The Insider, Heat and Manhunter (as well as the creator of "Miami Vice") is the subject of this American Film Institute documentary. Beginning with Thief, his 1981 debut, the documentary follows Mann's career through his 2001 biopic Ali. It also features interviews with actors who've worked with Mann, including William Petersen, Tom Sizemore and Jon Voight.