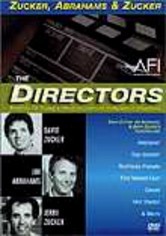 2001 NR 0h 58m DVD
As part of a series profiling some of Hollywood's most important directors, this documentary follows the careers of David Zucker, his brother Jerry and their friend Jim Abrahams. In 1969, the trio created Kentucky Fried Theatre, a comedy troupe showcasing the zany style that became their trademark. In the following years, the trio has directed a slew of hits, including Airplane, Top Secret!, Ruthless People, Hot Shots and the Naked Gun series.