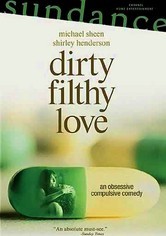 2004 R 1h 34m DVD
Michael Sheen and Shirley Henderson star in this sensitive romantic comedy about a man who struggles with Obsessive Compulsive Disorder (OCD) and Tourette's Syndrome. Unable to control his behavior, Mark (Michael Sheen) loses his job, his wife and his home before he finally joins a support group. Feeling less alone in the world, Mark bonds with the quirky members in his therapy sessions and begins a relationship with his group leader, Charlotte.