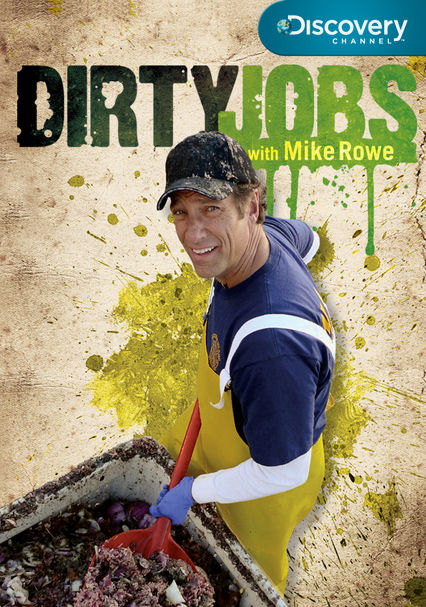 2005 TV-14 5 seasons
Ready to tackle any job no matter how disgusting or hazardous, host Mike Rowe travels across America to work side by side with the men and women who perform such thankless tasks as inspecting sewers, retrieving roadkill and handling snakes.

Host Mike Rowe rolls up his sleeves and gets down and dirty exploring a host of hard jobs. Rowe dons the shoes of a San Francisco sewer inspector, an Iowa pig farmer, a monkey caretaker, a bat cave scavenger, a roadkill cleaner and more.

In his quest to show viewers the dirtiest and most dangerous jobs, Mike Rowe travels around the country getting his hands on everything from explosives to manure. Find out what it takes to hunt bloodworms, wrangle water snakes and much more. In this collection of episodes, the daring host tests his tolerance for the putrid and the perilous by counting dead salmon, stamping concrete, removing tree stumps and tending to fainting goats.

Mike Rowe ranges far and wide to uncover some of America's dirtiest, smelliest and most dangerous jobs, which include steel mill worker, fish processer, turkey inseminator, aerial tram greaser and oil-spill cleaner in this Emmy-nominated season. Rowe also recalls some of his filthiest food-related jobs, discovers that being a cave biologist searching for slime eels isn't all it's cracked up to be and that cranberry farming is tougher than a person expects.

Strap on your biohazard suit and follow fearless host Mike Rowe as he gets down and dirty investigating more nasty, foul and yet strangely fascinating jobs that you never thought anyone would or could do.

No job is too dirty for intrepid host Mike Rowe in this Emmy-nominated Discovery Channel series that explores some of the world's grimiest occupations. But sometimes, even he can't believe how disgusting his assignments are. Whether he's rubbing elbows with skunks in Southern California as an animal control officer or chasing down feral chickens in urban Miami, getting clean again is a distant reward.

Parents need to know that this series' humor doesn't come just from the grubby vocations being reported on, but also from the irony of seeing Mike Rowe -- a well-spoken, likeable television host -- up to his elbows in the dirty jobs of everyday American laborers. The show includes adult-oriented sarcasm, but chances are it will go over the head of most kids. Younger viewers will be enthralled by the series' dirt, stench, and general ick, but the language and humor make it best for older tweens and up.

Various jokes and bad-pun-style innuendo (for example, when pressboard wood is suspended for staining, Mike comments that they're all "well hung").One episode features semen being extracted from stallions (with some associated remarks).

Discussion of pigs "meeting their maker" while feeding them slops to fatten them up.

Mutterings when frustrated, including "son of a bitch," "stupid job," "sucks," and ocassional bleeped words.

The series pays tribute to everyday Americans who work the jobs no one wants. It underscores the importance of doing your job well and with enthusiasm, whatever it is.

Pokes fun at pigs who get drunk from eating fermented ice cream.