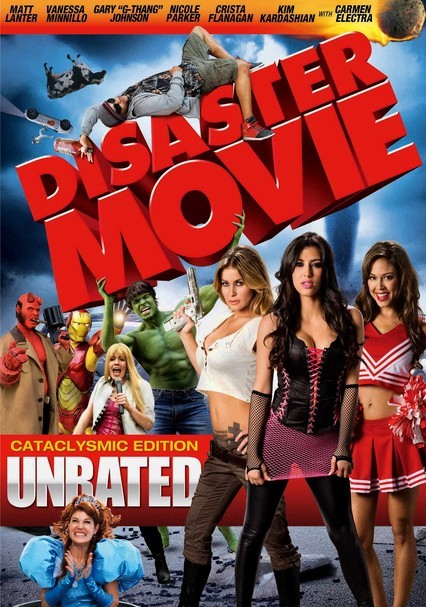 2008 UR 1h 30m Blu-ray / DVD
Trapped in a city as tornados and asteroids ravage the land, three terrified friends get swept up in a series of wacky adventures as they look for a way to stop the onslaught in this spoof of disaster flicks.

Parents need to know that this crude parody is from the same directing team responsible for Date Movie, Epic Movie, and Meet the Spartans. Like all of those movies, this one features a seemingly endless list of celebrity impersonations and reenactments of scenes from other popular films. Expect strong language ("s--t," "a--hole," etc.) and comedic violence. There are a couple of scenes of women in bikinis or lingerie, a shot of Beowulf's naked behind, and tons of sex-based jokes and references. As for commercialism, the entire film could be regarded as an ad for all of the movies and celebrities it references.

Many references to heterosexual and homosexual acts; a couple of female characters are shown wearing lingerie; Beowulf's naked rear is visible; Flavor Flav and a little person are in bed with a woman; the princess, who has a pimp, says she'll "do anything" if the price is right.

Gun play and comedic violence (like fake-looking body parts landing everywhere), Dr. Phil and others being shot, a delusional woman eating glass, a woman being crushed to death, and other disaster-movie stereotypes.

There really isn't a message except that perhaps the directors don't understand the meaning of parody. Women are portrayed as damsels in distress; there's a scene filled with gay jokes/stereotypes. A random little person pops up as a sexual joke.

Adults drink at a party, where teens try to steal booze; references to various drugs.