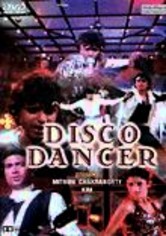 1982 NR 2h 14m DVD
Bollywood-style melodrama puts on its dancing shoes and struts out the predictable story of a performer's tragic life. At a young age, the poor Anil finds an evil, rich nemesis in Mr. Oberoi, who sends him and his mother to jail unjustly. Years later, when Anil's ready to exact his revenge, word leaks out and the tables are turned. Anil may never dance again, but Oberoi still has to live with his daughter's devotion to the humble entertainer.