Dispatch: Under the Radar 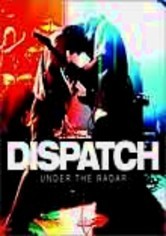 Dispatch: Under the Radar

2002 NR 2h 20m DVD
Crank up the volume for this concert film. Touring band Dispatch: Under the Radar may not get home to Boston very often, and this video shows why. The band -- whose mix of funk and reggae-rock helped them gain a Top 10 spot in &NFiRolling Stone&NFi_; magazine's releases of the year -- hits the stage and performs such fan favorites as "Bats in the Belfry," "Two Coins," "Mission," "Bang Bang," "Passerby" and about 15 other songs.