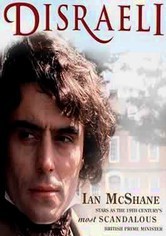 1978 NR 2 discs
Ian McShane stars in this Emmy-nominated BBC miniseries tracing the rise of Benjamin Disraeli, the famed 19th-century British politician who helped create the Conservative Party and went on to serve two terms as England's prime minister. Despite criticism that he was -- among other things -- a fop, a dandy and a rake, Disraeli would become one of the greatest prime ministers in Britain's history ... and one of its most scandalous.