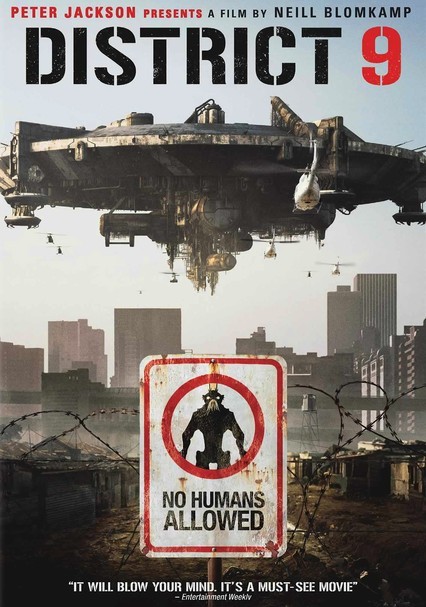 2009 R 1h 52m Blu-ray / DVD
When aliens land on Earth, a global conglomerate forces them into rigid containment zones where they are compelled to labor, even as their otherworldly technology is exploited for profit. As tensions build, a rogue agent leads a resistance movement.

Parents need to know that this gritty, buzzworthy sci-fi epic filmed in South Africa (and produced by Lord of the Rings director Peter Jackson) is full of extremely realistic, bloody violence, including severed limbs, lots of bodies, piles of high-tech weapons, and even torture. The movie's aliens aren't cute or appealing in any way -- they're scary-looking, insectoid creations with complex biologies and lives. Expect constant strong language (especially "f--k"), as well as some drinking, smoking, and discussion of sex.

Some discussion of prostitution and exotic venereal diseases in connection with talk about human/alien interspecies sex.

Constant, bloody, and brutal violence, some of it involving humans and some involving humanoid, insect-like aliens. Kicking, fighting, severed limbs. Torture, including a man being jabbed with cattle prod so that his hand will pull the trigger of a gun. Characters use high-tech sci-fi firearms, some of which strike with such force that they liquefy their victims. Alien weapons are tested on living beings. Scary medical experimentation imagery, including bloody, explicit body modifications as a man has his DNA rewritten by an alien virus.

Lots of harsh/strong language, including "f--k" used near constantly, as well as "bastard," "oh my God," "balls," "crap," and more. Some of the swearing may be hard for American audiences to understand given the actors' accents.

Although it takes place in a sci-fi context, the movie offers a fascinating perspective on South Africa's struggle with apartheid -- and on any nation's struggle with immigration and fear of "the other." The realization that the filmmakers didn't have to build the slums that their disenfranchised alien immigrants live in should also offer pause for thought.