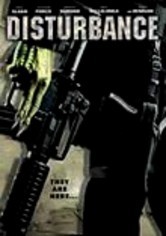 2005 NR 1h 33m DVD
Ruthless aliens unleash a deadly attack on Earth and survive by taking over human bodies. The planet's only hope lies in the hands of … a serial killer? Enlisted by the same government that imprisoned him, seasoned slaughterer Hud Masters (Paul Sloan) takes dead aim on the dastardly space creatures with the help of a sexy FBI agent (Colleen Porch). Writer-director Nick Vallelonga shot this ambitious sci-fi thriller for only $35,000.