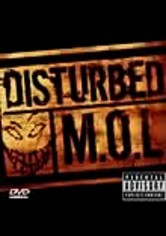 2002 NR 2h 30m DVD
Chicago's native sons, the members of metal band Disturbed, are the stars of this rockumentary capturing the ins and outs of their raucous 2001 tour, including home videos, interviews, rarely seen footage and more. Features such hits as "Down with the Sickness," "Voices" and "Stupefy," as well as remakes of their music videos (including ones made before they signed a record contract) and studio sessions.