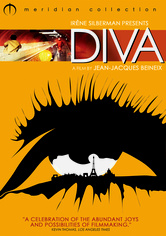 1981 R 1h 58m DVD
When 18-year-old Jules (Frederic Andrei) secretly tapes the concert of a superstar diva who refuses to be recorded, he accidentally winds up with another tape that identifies a top mobster involved in an international sex and drug ring. Suddenly, Jules is being chased through the streets of Paris by blackmailers, hit men and the police. Action, arias and assassins all collide in this romantic thriller directed by Jean-Jacques Beineix.