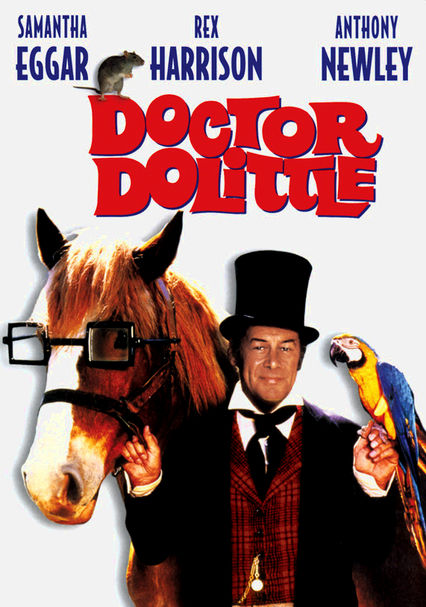 1967 G 2h 31m DVD
Fed up with human patients, the dogged Doctor Dolittle switches specialties -- and species. After learning to speak hundreds of animal languages, he takes to the high seas as a world-famous veterinarian in search of the Great Pink Sea Snail.

Parents need to know that this classic family tale is exceedingly G-rated -- for lively songs, fuzzy animals, dancing and cavorting. But watch out for some dated stereotypes, including that of a "Red Indian" called Long Arrow who sends an illiterate message along with an animal he's captured for Doolittle. Women also get second-class status, which is evident when Dolittle claims that he treated Emma "very well," even though she's a female. Children younger than 5 will appreciate the fun and silliness, but may be impatient with the slow first half.

Chaste kisses among characters (and animals!). A man swoons when he is kissed on the cheek by a woman. After a shipwreck, Emma says, while wearing a full-length sleeveless dress, that "this is my underwear."

Slapstick scenes of a man's broken foot getting stomped on and animals running wild, causing things to fall on people's heads. A ship capsizes, but all passengers are fine after the storm. Natives of an island threaten to burn characters and cause them a "death of a thousand screams," though a peaceful resolution is found.

Some stereotyping about Irishmen's proclivity to drink, women's capabilities, and "natives." On the positive, the movie encourages people to treat each other kindly.

Matthew drinks whiskey from a pint throughout the day. A magistrate is reported in court to have drunk a large quantity of wine and brandy the previous night.