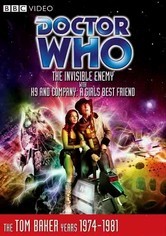 1977 NR 1h 33m DVD
At the edge of the solar system, a mysterious virus infects the crew of an exploration ship. When Doctor Who (Tom Baker) arrives to investigate, the parasite turns him into the "Nucleus of the Swarm," a host for massive new proliferation. Racing against time, he miniaturizes clones of himself and Leela (Louise Jameson), and the two enter his body to confront the virus. Who's robot companion, K-9, makes his debut in this episode.