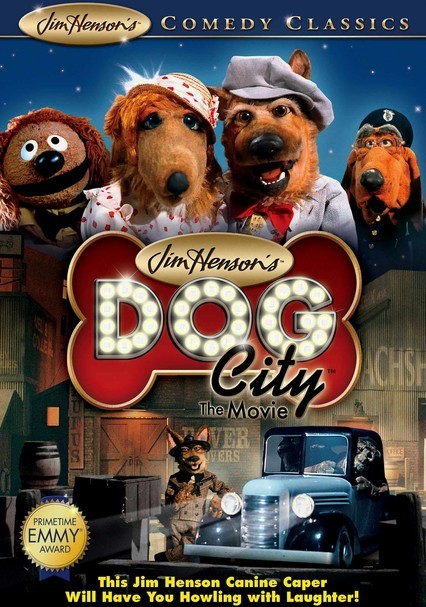 1989 NR 0h 40m DVD
In the gritty canine world of Dog City, gutsy bar owner Ace gets himself into serious trouble when he refuses to pay off local kingpin Bugsy. Constantly besieged by tough gangsters, Ace tries to save his business by fighting back with all his might. Directed by legendary puppeteer Jim Henson, this homage to classic gangster movies features amusing action sequences and spawned a Dog City animated series.

Parents need to know that this Jim Henson production -- originally a made-for-TV special that aired in 1989 -- is a crime caper modeled after 1930s "film noirs," so there's a lot of fedora-wearing, handgun-wielding dogs that spout anachronisms like "Why I oughtta." There's a good bit of violence (guns shot, dogs taken hostage and hit with rolled-up newspapers), but all of it is cartoonish and exaggerated. Two female dogs are the girlfriends of two male dogs (one is a crime boss' "moll" that makes the male dogs drool), and the couples embrace and nose-kiss. The female dogs are as brave as the male dogs, and there's a good message about nonviolence and standing up to bullies.

Rowlf introduces Belle by saying all the dogs drool over the mere mention of her name. Colleen and Ace flirt with each other, nose kiss, and eventually get married. Colleen sings a torch song in which she flirts with the audience and sits on different dogs' laps.

There's a lot of gun violence for a kiddie flick. At one point, every dog at Bubba's bar pulls a gun on Ace, and later Bugsy and his thugs (and girlfriend) pull guns on Ace and Colleen. Shots are fired but no one is killed, although one henchdog is injured several times (comically) and Bugsy is shown falling into the river. Colleen is taken hostage and tied up. Ace is hit in the face several times with a rolled-up newspaper.

There are positive messages about non-violence, refusing to negotiate with criminals, and standing up to do what's right, even if it's the more difficult choice. The female dogs are just as brave as the male dogs.

Most of the action takes place in a doggie bar, where dogs have bones/drinks in front of them, and the crime lord Bugsy often smokes a cigar.