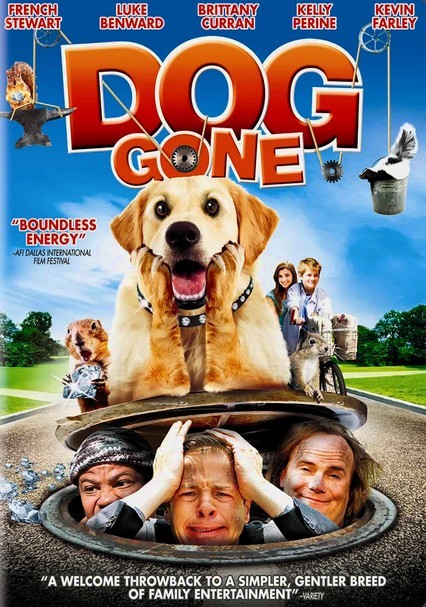 2008 PG 1h 48m DVD
Young Owen is in for adventure after taking in a runaway dog carrying millions of dollars in stolen gems. The boy gets a chance to use his ingenious intruder deterrents when the jewel thieves track the pooch to his secret fort.

Parents need to know that Dog Gone (which in some releases was known as Diamond Dog) is a comic rip-off of Home Alone, violent in the same comic way, with equally bumbling criminals chasing a heroic and strategically superior child. But here, the parents are eliminated from most of the action by way of a business trip, forcing Owen to rely on his many mental resources. Two maddeningly dense henchmen hunt for a dog in which they've smuggled $5 million worth of diamonds. The goons' collective stupidity nullifies any real threat their nefarious mission might otherwise pose. Owen also has been bullied, and the plot simultaneously brings comeuppance to his bully as the criminals are arrested. Some mild name-calling ("dork").

Most threats of violence are comic, although smaller children may take the imminent danger more to heart. A bad guy wields a switchblade as he unsuccessfully attempts to cut smuggled diamonds out of the belly of a dog. Owen belts the criminals with catapulted tennis balls. He glues them to a small sled and sends it careening dangerously down a steep hill. He bonks them on the head with rocks and slams doors on them. No one incurs injuries more serious than bruises and blows to the ego. A bad guy punishes his underlings by giving them wedgies. Bullies throw Owen's pants and bicycle into a river.

Owen demonstrates that people can be kind, accept differences, and maintain dignity in the face of bullying.