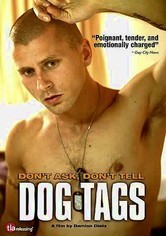 2008 NR 1h 30m DVD
Nate Merritt (Paul Preiss) enlists in the Marines in order to support his fiancée. But during a furlough in California, Nate meets an uninhibited gay man who leads him on a journey of self-discovery -- and gives him new insight into the father who abandoned him. This heartfelt coming-of-age drama from writer-director Damon Dietz co-stars Candy Clark, Amy Lindsay, Hoyt Richards and Barry J. Ratcliffe.