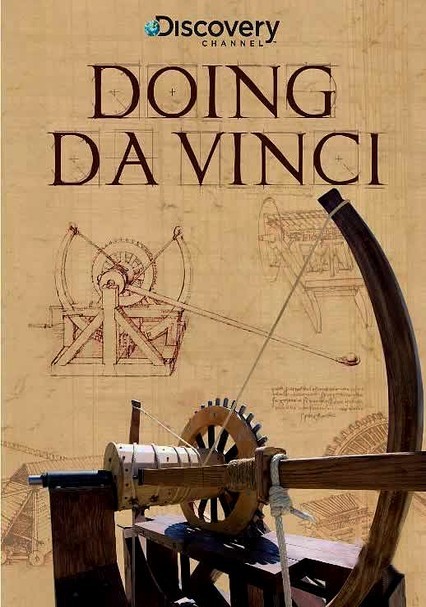 2009 NR 2 discs
Renaissance man Leonardo da Vinci didn't limit himself to painting and sculpting: He was also a prolific inventor, leaving behind notebooks filled with designs of myriad weapons of war -- some of which are re-created in this Discovery Channel series. An industrial artist, an engineer, a carpenter and a special-effects designer join to turn da Vinci's designs into working devices, including a circular armored tank and a three-story siege ladder.

Parents need to know that this educational series about creating machines designed (but never built) by famed artist/inventor Leonardo Da Vinci doesn't shy away from mentioning the machines' original purpose: war and killing. But the emphasis is much more on whether or not each machine could have worked than on demonstrating its potentially bloody impact. There are also several shots of one of Da Vinci's most famous drawings -- a nude man in a circle -- but it's not at all sexual.

One of Da Vinci's most famous drawings -- a nude man inside a circle -- is repeatedly shown, including the groin area. It's not exploitative, graphic, or sexual, but it's there.

The designs that the team is working on are based on Da Vinci's drawings of war machines. No one is hurt, but human-shaped targets used during tests, and team members don't hide from the fact that these machines were designed to kill people.

A machine is referred to as "kick ass," but that's about the extent of the salty language.

Team members work through their disagreements/philosophical differences in an amiable way. The show promotes taking an active interest in science and experimentation. The team is entirely male.